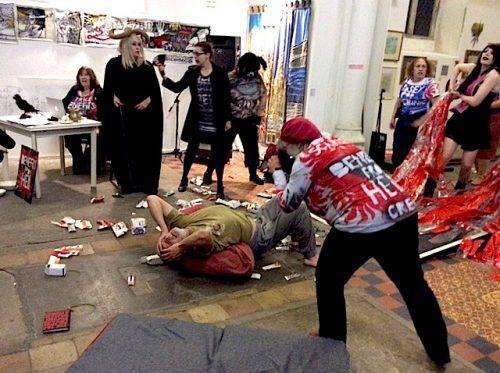 The play aims to highlight the plight of disabled humans under the current Tory government and the previous Tory /Lib Dem coalition. It features the DEAD PEOPLE DON’T CLAIM banner, and a host of local legends, telling ‘The Tragic True Life & Deserved Death of a Benefit Scrounger by Himself, John Faust’.

“I love it, John,” exclaims Lucifer, “but I think that title deserves a Dandy tweak?”

Faust’s benefits have been stopped without warning, he’s overdrawn, he can’t pay his rent, the bailiffs are coming, his car needs a new clutch, his dog’s at the vets with blood poisoning, the DWP brown envelopes keep piling up, in despair, Faust throws himself off Beeston Bump, but Lucifer won’t let him drown.

I thought long and hard about the title. I realise some people find the word ‘queer’ triggering, and I’m sorry if that upsets anyone on the day, that is not my intention. Context is king.

Queer is a more inclusive term, i.e. there are non-LGBT people who identify as queer. It can mean strange, different, other, and I think we queers have thoroughly reclaimed it by now.

The first people the Nazis killed systematically were disabled people, after demonising us as a burden on taxpayers in the press. Sound familiar? Look up Aktion T4. Under the programme certain German physicians were authorized to select patients “deemed incurably sick, after most critical medical examination” and then administer to them a ‘mercy death’.

Today, the United Nations has found the current UK Tory government ‘guilty of grave and systematic abuse of disabled people’s human rights’, twice. People are dying because of the way the benefit system is being used as a weapon against them. I feel like an enemy of the state because I have disabilities. Fuck that. ‘If the system cripples you, you must cripple the system!’ Oscar Wilde. This play is my way of fighting back.

“The best theatre production you’ll see all year! Telling the sad story that faces so many of our most vulnerable citizens with fantastic wit and compelling drama.” Lewis Martin

“Finish your book John, I love it! But I want a bigger part and a happy ending! Fearless storytelling. The performance in the church, especially, reminded me that theatre began in churches in England. And if ever we needed miracle plays, today is the time. Great writing. Great delivery. And never have chains been worn so stylishly.” Dugald Ferguson

Although the controversial title and theme were left out of the printed version of Norwich Pride’s programme, A Very Queer Nazi Faust will be performed in the big tent on Chapelfield Gardens at 4pm on Pride Saturday 29 July, and lasts about an hour. “Dramatic and hard hitting. A visual and sensory feast with a strong and topical message.” Nick O’Brien, Norwich Pride

“I loved it ❤ Jan McLachlan ⭐ Well written, totally got it. 👍 Left me wanting more”

Everyone is giving their time free, but donations towards props and costumes etc most welcome.

Great use of the space, imaginative choice of props, dramatic music, so not up-your-arse drama. Jacky Girling

To highlight Queer Solidarity with disabled people, Vince will be carrying the DEAD PEOPLE DON’T CLAIM banner at Norwich Pride, and anyone who wants to, is welcome to join him. Vince is also collaborating with artist and activist Lisa Mac to create 100 Triangles of Love, pink/black cardboard triangles to carry on the parade to highlight Queer Solidarity with People With Disabilities, and our shared history of oppression, and the ongoing oppression we face around the world. If you’d like to carry a Triangle of Love, or make your own and join us, get in touch via vincelaws@gmail.com or on Facebook.

Notes:
I found this Granite and Sunlight blog useful.

Pink Triangle
The pink triangle (German: Rosa Winkel)[2] was one of the Nazi concentration camp badges, used to identify male prisoners who were sent there because of their homosexuality.[3][4] Every prisoner had to wear a downward-pointing triangle on their jacket, the colour of which was to categorise them by “kind”. Other colors identified Jewish people (two triangles superimposed as a yellow star), political prisoners, Jehovah’s Witnesses, “anti-social” prisoners, and others the Nazis deemed undesirable. Pink and yellow triangles could be combined if a prisoner was deemed to be gay and Jewish.[5] Originally intended as a badge of shame, the pink triangle (often inverted from its Nazi usage) has been reclaimed as an international symbol of gay pride and the gay rights movement, and is second in popularity only to the rainbow flag.[6] https://en.wikipedia.org/wiki/Pink_triangle

Black Triangle
The black triangle was a badge used in Nazi concentration camps to mark prisoners as “asocial” or “arbeitsscheu” (work-shy). It was later adopted as a lesbian or feminist symbol of pride and solidarity, on the assumption that the Nazis included lesbians in the “asocial” category. More recently it has been adopted by UK disabled people’s organisations responding to increasing press allegations that disabled benefit recipients are workshy. https://en.wikipedia.org/wiki/Black_triangle_(badge)

2017 marks 50 years since the partial decriminalisation of homosexuality in the UK. Peter Tatchell’s piece in The Guardian explains how painfully slow that progress has been

An artist with something to say, and...