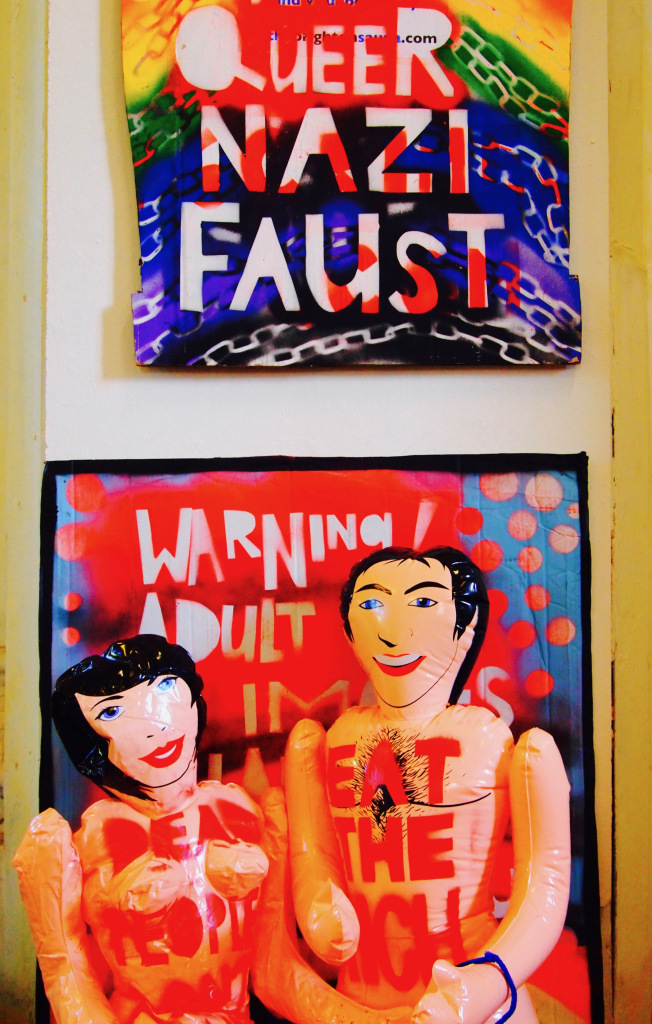 Vince Laws’ protest-play, ‘A Very Queer Nazi Faust’ is the stunning result of ongoing development, lack of funding and an “angry depression diary”. It has been performed in a host of untraditional venues including: the streets of Birmingham during the Conservative Party Conference; outside the Houses of Parliament (whilst Ian Duncan-Smith was being interviewed); and, most recently, the Community Tent at Norwich’s ninth Pride celebration. Cast through social media, the performance was anarchically unpolished and filled with righteous, infectious anger. The roles of the  “thirteen local legends” brought together in art and solidarity against “state sanctioned torture” were all filled by local queer and disabled activists. Although the title of the show was excluded from the official Norwich Pride 2017 programme, The Community Tent was still filled with an enthusiastic and engaged audience.

‘A Very Queer Nazi Faust’ began life as a “depression diary”, which would have been too expensive to publish (another example of barriers faced by disabled or otherwise marginalised authors and this kind of protest art) and developed into a play protesting against the press and government’s ongoing violence towards disabled people in the UK. After receiving some funding and support from Disability Arts Online and The Literary Consultancy, Laws gained “the confidence to build it into something” – and that something is truly incredible.

The “constantly evolving” play is an organic, poetic reimagining of Dr Faustus, with reference and rage woven throughout. It is uncompromising, unpatronizing and unsettling, opening with a striking monologue form Laws as the suicidal John Faust calling repeatedly for: “Relief! That’s all I want!” The first half takes the audience through an honest depiction of depression and suicidal thoughts in the face of a harsh bureaucracy bent on diminishing the will to live. The parade of demons following Jan MacLachlan’s Lucifer/ Mephistopheles provided apt and comedic representations of the forces at work.

The utterly accurate set of platitudes from the neurotypical Paris Psychologist were hilarious, and the whole play was wonderfully, unapologetically dirty.

The second half prominently features the greatest crochet shorts in the history of wool, and brought with it much of the comedy interspersed in the first half. The utterly accurate set of platitudes from the neurotypical Paris Psychologist were hilarious, and the whole play was wonderfully, unapologetically dirty. Whilst the second half was slightly more chaotic in terms of plot, the chaos felt natural and seemed to have an overall purpose, even if it was slightly hard to follow. Ending the performance with an audience-participatory chant of: “Dead people don’t claim! Eat the rich!” was a powerful move, and I can only imagine with glee how that must have sounded from outside The Community Tent!

There were a lot of very subtle, cleverly put together moments throughout the performance, slogans interspersed with props and worn by the performers brought the message of necessary and direct action back into view at any time you might forget it, and the camp, upbeat musical stylings worked well as a contrast by which to underline the seriousness of the subject. The occupation of political figures by members of the cast – Faust acting as Corbyn at one point, and Helen of Troy becoming the triple-breasted Pope, as well as a fantastically deadpan Theresa May – helped to realise the plot, and was simultaneously irreverent and biting. Vince Laws’ poetry background came through in the language of the play, and the incisive lines and rhythms of “Easy pickings. Cut. Cut. Cut” and “Death is What This Government Wants” were emphasised by their lyrical delivery. It was a joyous experience to see ideas forming on stage and being tested live; the audience was made to feel as much a part of the production as the cast.

It was a truly enjoyable and emotional experience, and everyone involved should be so, so, proud of themselves – for bringing it to Norwich Pride, for emphasising the need for queer disabled solidarity and for doing it in such a confronting and beautiful way. More information, videos and details of the cast and crew can be found in the Facebook Event Page.

The Norwich Radical is non-profit and run by volunteers. All funds raised help cover the maintenance costs of our website, as well as contributing towards future projects and events. Please consider making a small contribution and fund a better media future.

An artist with something to say, and fearless in saying it.”….Marcus Dickey Horley, Curator, Tate Moder

An artist with something to say, and...